Patrick O’Reilly: making hay and other art that shines 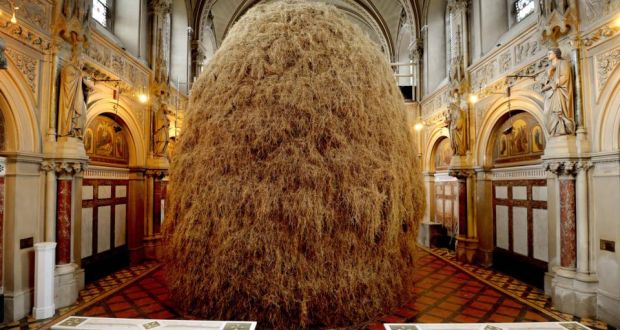 Patrick O’Reilly’s wild eclecticism can be perplexing, but his latest work, a giant haystack in a church, is a thrilling success.

How often is it that you smell a work of art before you see it? Patrick O’Reilly’s Haystack (The Consideration of the Planets , 2013), arrests the senses on every level.

The setting helps. After all, how often is it that you see an enormous haystack rising almost to ceiling level in the nave of a church? Thirty feet tall, the haystack is old-fashioned in style, taking its cue from a series of paintings made by Monet in 1890 to 1891. It’s a shape we don’t see in the fields any more, and the church setting makes it even more strange. It seems to brood and be half alive, echoing those mountain-like shapes that obsessed Richard Dreyfuss’s character Roy in the 1977 film Close Encounters of the Third Kind .

The church in question is St Alphonsus in Drumcondra, Dublin. Now deconsecrated, it is O’Reilly’s studio. Although it is due to be cleared for his forthcoming exhibition, when I visit it contains such a variety of artworks at various stages that it would be easy to imagine it was the workspace of several artists instead of just one.

There is a frame containing a hanging grid of plumb-bobs, those tools that have been used for thousands of years to establish a vertical line. There are bear shapes woven from hessian, a wall of plastic take-away cups, wooden window boxes containing pink silk flowers, and the start of a sculpture of a girl with a mobile phone. 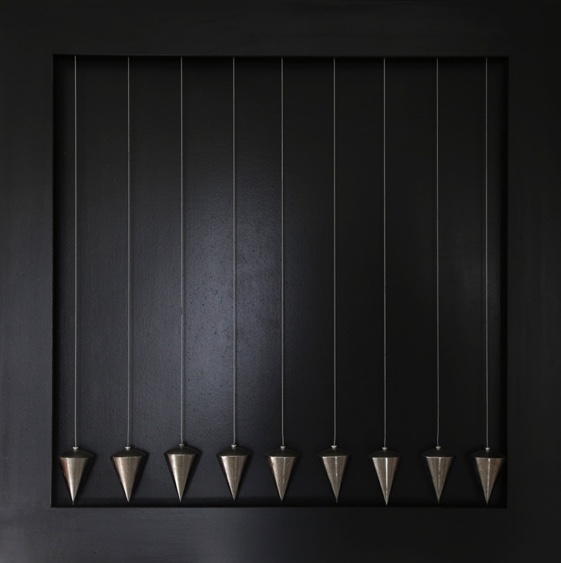 Wary art world
It is perhaps this eclecticism that makes the art world wary of O’Reilly. His work is exhibited and collected around the world; he has an impressive CV that includes exhibitions at Dublin City Gallery the Hugh Lane, the Solomon Gallery, and the Palais- Royal and Centre Culturel Irlandais in Paris; and he has received awards from the Royal Hibernian Academy and public commissions in China, Greece, the Netherlands and France. However, he seems to just miss being at the centre of the institutional and critical mass that decides what art is, and what it ought to look like.

One of the reasons for this is that it is next to impossible to pin down what O’Reilly’s work looks like. There are his bronze bears, which can be seen as a trio marching outside the O2 in Dublin, as well as in locations on almost every continent. Get used to the bears, and then think of the fantastical coloured figures, the Boundary Kings , on Thomas Street, Dublin and the elongated Queen Maeve holding a bull’s head aloft on Burlington Road.

O’Reilly also paints, makes installations from plastic cups and tin cans, experiments with sequences of dolls’ heads, and explores what happens when you try to work with water. 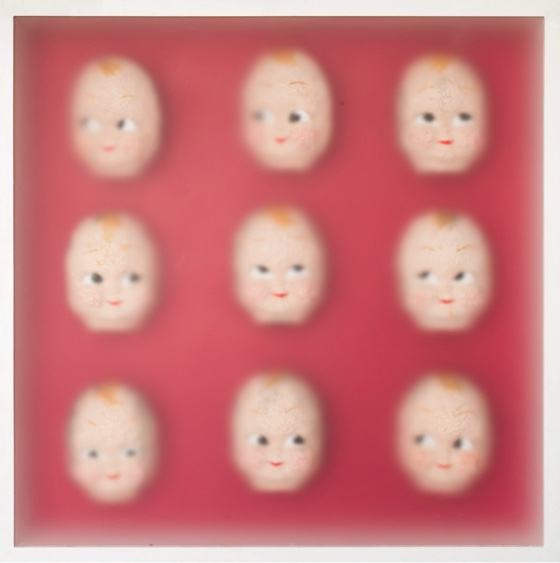 The problem is one of context. At its most reductive level, we tend to want consistency from an artist, so we know we’re right when we like something and we haven’t been fooled by a fluke. Consistency allays the uncertainty many of us feel when confronted by contemporary art. All the best artists explore and experiment; it’s just that O’Reilly doesn’t seem to edit.

While Haystack is marvellous, a perfectly judged blend of presence, place and structure, the plastic-cup and tin-can assemblages leave me rather cold. Paper Figures (2012), an advancing horde of nun-like forms, reminds me of a slightly more sinister version of Antony Gormley’s terracotta Field from 1991, which was shown at the Irish Museum of Modern Art in 1993. But it’s unclear where his recent paintings on melamine are going. 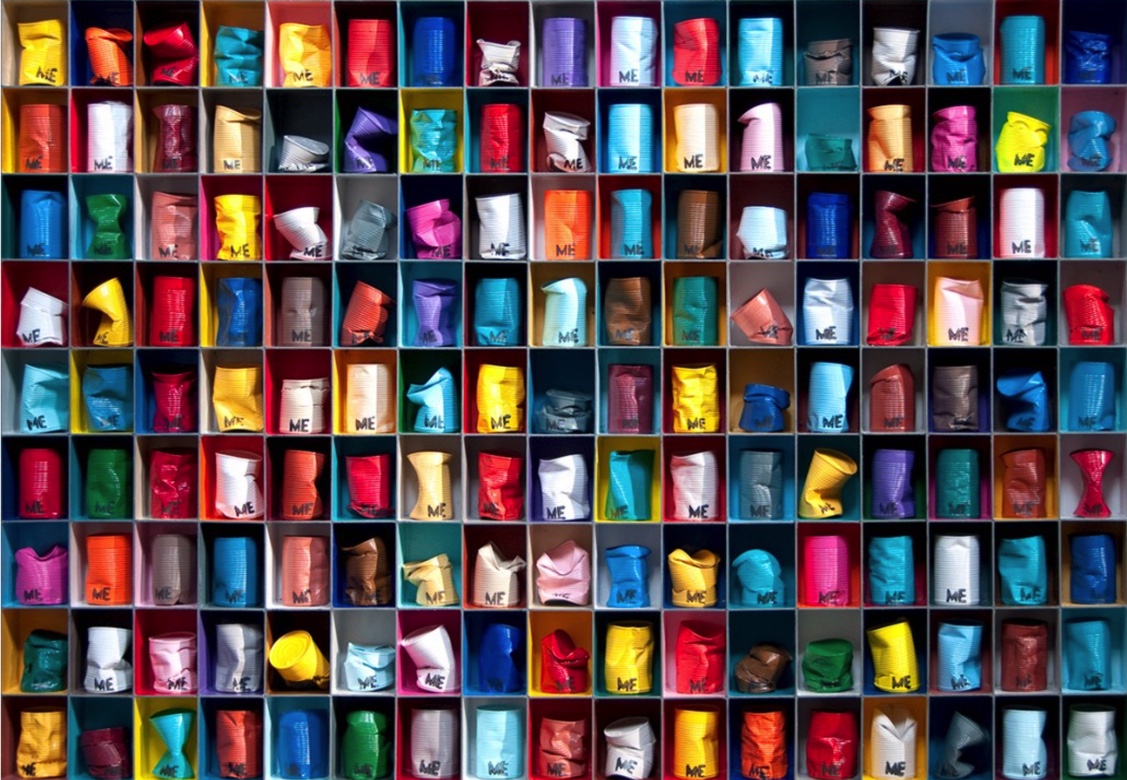 In conversation, O’Reilly is equally eclectic. We cover matters including the shape of haystacks; how the drug heroin got its name; how art tries to imitate music in its ability to evoke emotion; how from a distance the world is a good place and is getting even better, but how closer up you can home in on loneliness and sorrow; and how the best ideas are, at their core, the simplest. He talks about attempts, failure, the loneliness of trying to refine ideas, and of that moment all artists dread – when you realise that what is in your head refuses to come out in a way that satisfies the impulse to make it.

Bronze work
O’Reilly says the late Barry Flanagan introduced him to bronze casting, which is interesting because there is something in his bears of Flanagan’s myriad hares (there is one on view outside the Irish Museum of Modern Art).

Both artists have the same great facility to imbue an animal form with emotional content, and yet I had often wondered whether Flanagan and O’Reilly had sometimes wished they had never started on their chosen beast, in the same way a successful crime writer once told me that he wished he’d never invented his detective and often fantasised about killing him off, just to make a change.

So does O’Reilly get bored with bears? The answer is yes and no. His bronze bears give him the financial freedom to make more experimental work, to create installations, such as Haystack , that are unlikely to find a buyer. They enable him to refine themes and variations, and add subtle nuances of expression and emotion. It is also grounding, after some wild explorations of ideas, to return to something he knows he can do, and do well.

Behind the haystack, awaiting assembly in the Oliver Sears Gallery for O’Reilly’s new exhibition, are the walls of his candy-coloured House (2012). Once installed, the pretty pink exterior will have to contend with perpetual internal rainfall. 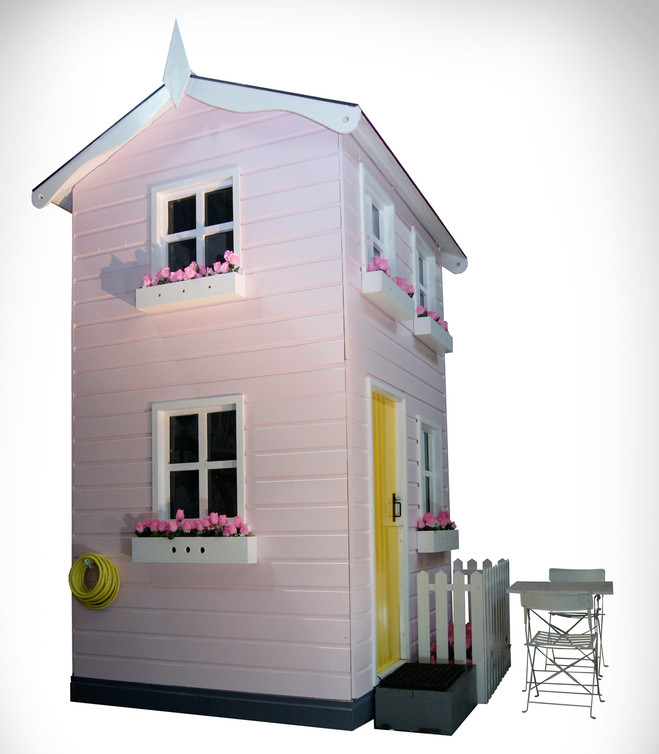 Perhaps O’Reilly does himself a disservice by exhibiting such a wide range of work. But on the other hand, if he didn’t experiment so widely, maybe I wouldn’t be sitting in a chilly church, experiencing the wonders of the thrillingly alive anachronism of a giant haystack in a former house of God. Heaven and Earth combined? His work evokes hope and futility, the practical and the spiritual, and the distance we seem to have come from the days when we were closer both to nature and to belief. In this, at least, O’Reilly has scored a perfect hit. 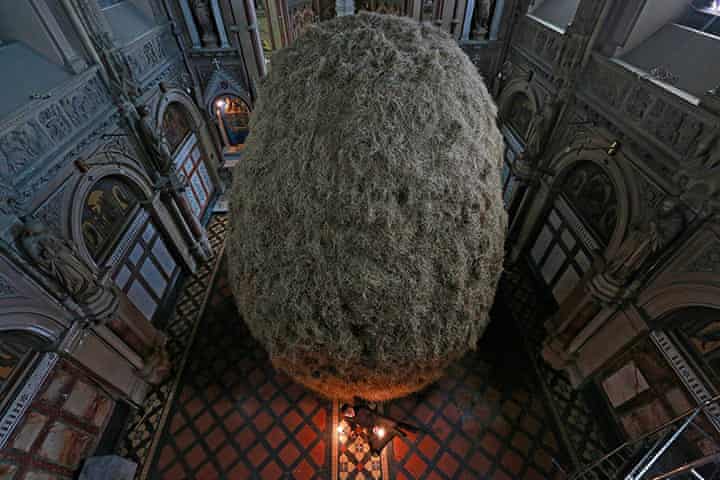