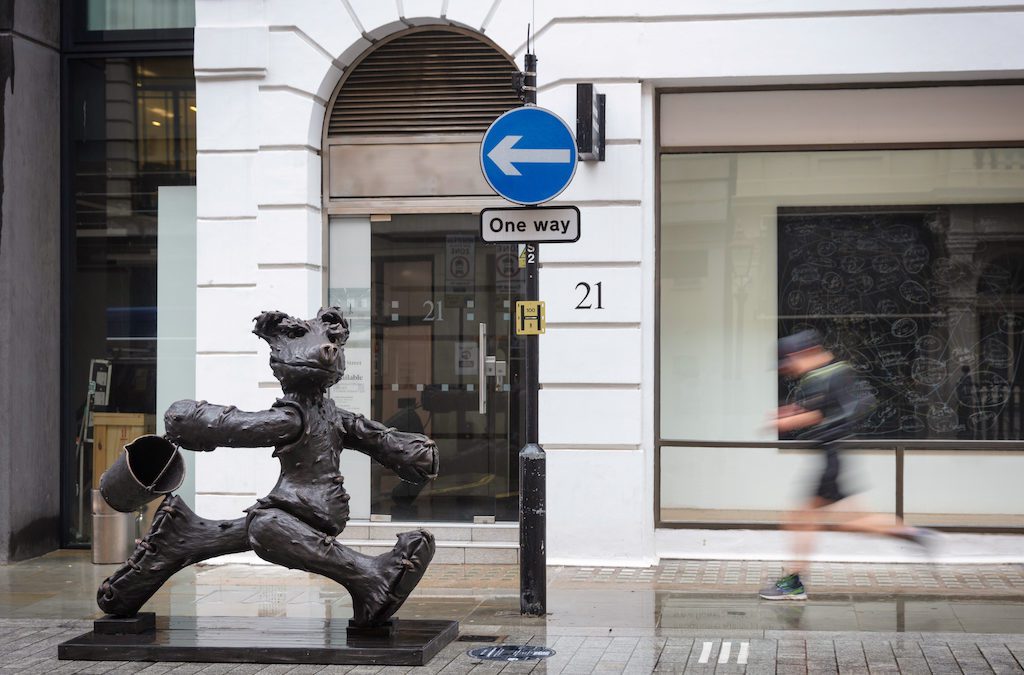 Gormley’s Fine Art (Dublin) are presenting three works by Patrick O’Reilly for the Mayfair Sculpture exhibition. Bear with Bucket skips along just outside the entrance to The Mayor Gallery at 21 Cork Street.

Previously an entrepreneur, O’Reilly became an artist later in life whose personality and humour shines through particularly in his unique bronze sculptures. He often references the animal kingdom to express his fears and sentiments about life and uses the much-loved light-hearted figure of the bronze Teddy Bear to explore these darker issues.

O’Reilly wrote that: “From childhood days our first memory is that of a bear. He personifies innocence, companionship and trust. He is a pure spirit and symbolises unworldliness. As adults many of us remember this childhood time with a reverence, as sadly this era must end. Life must take its course and is never stationary.

The Bear marches on with a look of resigned acceptance. He keeps going despite life’s turbulence and uncertainty. He is silent and does not complain. All my figures, even if they are teddy bears, take the form of humans. A teddy bear is a very non-threatening animal, but a bear is very vicious, so it’s that combination. He’s got enormous power. He could eat you, but he is very gentle. Teddy bears are very universal.”

Monumental large-scale public commissions mean O’Reilly’s sculptures become much loved parts of the local landscape particularly in his home country of Ireland with prominent sculptures standing outside the O2 Centre and Grafton Street, Dublin. However, His work can be found all over the world including, a ‘Strolling Bear’ in Paris and a bear wearing a tutu in Cape Town (‘Castle of Goodhope’, 2004). O’Reilly has exhibited widely and has had solo exhibitions in France, Canada, China and Ireland and is represented in the UK by The Mayor Gallery who has held several past exhibitions of the artist. He is included in many important international collections worldwide, including the permanent collections of the Hugh Lane and in the Greek Museum in Athens. O’ Reilly currently lives and works between Dublin and the Auvergne, France.